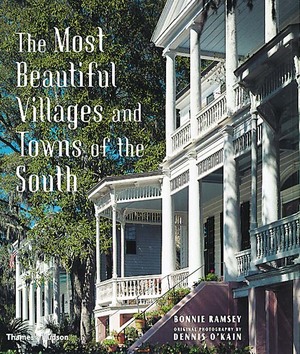 The region divides naturally into four geographic areas, each one a stage along the path of settlement. The miles of shoreline on the Atlantic Ocean and the Gulf of Mexico provided natural harbors for the first arrivals. Piedmont, at the foot of the mountains stretching from Virginia to Georgia, possessed the rich soil that made it the center of Southern agriculture. The profusion of rivers and the rich land along their banks attracted settlers from the Carolinas and Georgia, while the final push was to the deep interior and the mountains, the upcountry from the Blue Ridge chain in Virginia to the Texas hill country. The villages of these regions are varied, but those included in this book all have their individual beauty, whether expressed in white clapboard or Victorian brick.

Their historical variety, too, is expressed in their names, demonstrating the diversity of their origins. The name of Wascahachie, Texas, is derived from the Native American word for “buffalo creek.” Waterford, Virginia, is unmistakably Irish, while Camden and York in South Carolina have a distinctly English ring. Whatever their origins, the villages and towns included in this book have one thing in common: their beauty. And this exquisite picture of the South is completed by special illustrated features on its horse culture, its churches and cemeteries, and its fabulous gardens. A Traveler’s Guide to sites, local festivals, hotels, and guest-houses provides essential information for the visitor. Produced in association with Veranda magazine.

Bonnie Ramsey is a contributing editor to Veranda magazine and Director of Communications at the Georgia Museum of Art.

Dennis O’Kain is an architectural photographer whose work has appeared in Veranda and Aperture, among many other publications.