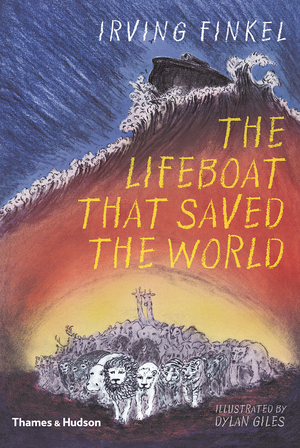 Four thousand years ago, long before the story of Noah’s Ark was written down in the Hebrew Bible, the Sumerians and Babylonians of Ancient Mesopotamia knew the story of the flood and the special boat that rescued all the animals. Its ancient Babylonian hero, Atra-hasis, was— just like Noah— ordered by his god to build a lifeboat to keep his family and all the animals safe until the flood was over. Unlike Noah, Atra-hasis was asked to build a round coracle boat the size of a soccer field—and given very precise instructions to follow.

Told from the perspective both of the central hero, Atra-hasis, and of his youngest son, Very-quick, this remarkable story is supplemented with asides that give fascinating insights into daily life in Ancient Mesopotamia as well as the historical sources for the story.

A tale of destruction on an unthinkable scale and survival against the odds, The Lifeboat that Saved the World is a story that has truly stood the test of time. The narrative is complemented by historically accurate detail and insights into how people lived all those years ago.

Dr. Irving Finkel is Assistant Keeper of Ancient Mesopotamian script, languages and cultures at the British Museum, London. He is the author of The Ark Before Noah: Decoding the Story of the Flood.