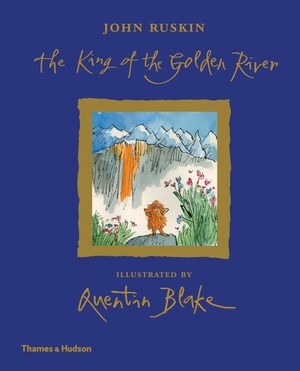 A classic nineteenth-century fairy tale of adventure, magic, and good deeds, with an ironic sense of humor, brought back to life with illustrations by Quentin Blake.

The King of the Golden River tells the tale of the Black brothers: the kind-natured eleven- year-old Gluck and his two nasty older brothers, Hans and Schwartz. For Gluck, play is cleaning the floors, and his education consists of a wholesome quantity of punches. One stormy evening, Gluck is left at home to prepare his older brothers’ dinner when an extraordinary-looking little man knocks at the door. Having been warned not to let anyone in, Gluck watches as the little old man stands drenched and shivering at the door. His soft heart tells him to ignore his brothers’ advice, and so Gluck’s encounter with the mysterious King of the Golden River begins. Appearing at first as a beggar, then the Southwest Wind, and finally as a dwarf, the King of the Golden River issues Gluck a challenge: to climb to the source of the Golden River and throw into the stream three drops of holy water. If he can achieve this, the river will turn to gold.

Ruskin’s Victorian tale—first published in 1842—of good’s triumph over evil is a gripping adventure for all ages, and is brought vividly to life in new, never-before- seen illustrations by the celebrated Quentin Blake.

The kinetic, colorful artwork for this edition comes from the masterful Quentin Blake… The modern reader ages 5-11 will find, in this appealing edition, a story of vice punished and virtue rewarded… Mr. Blake's pictures add enough dash and wit to make the book succeed.

John Ruskin was a nineteenth-century art critic, writer, painter, and art collector, and a committed supporter of J. M. W. Turner and the Pre-Raphaelite Brotherhood.

Quentin Blake is one of the world’s most treasured illustrators and has illustrated more than three hundred books. Known for his collaborations with esteemed writers, including Roald Dahl, Russell Hoban, and Michael Rosen, Blake has won numerous awards, including the Hans Christian Andersen Award for Illustration.