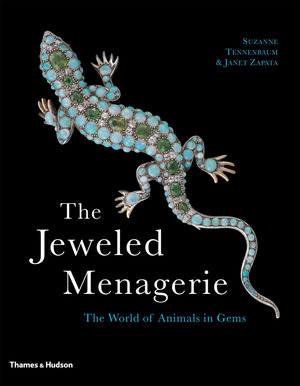 A showcase of the most spectacular examples of animal motifs in jewelry by master jewelers from America and Europe.

The depiction of animals in art goes back to prehistoric cave paintings; and the early history of jewelry, from ancient Egyptian scarabs to Renaissance pendants, shows abundant examples of animal imagery.

In the nineteenth century a new group of designers, seeking to satisfy the growing middle class's appetite for jewels, revived the Egyptian and Etruscan styles. Animals of all sorts were incorporated: birds, mammals, insects, reptiles, and fish. Prominent houses such as Fouquet, Fontenay, Falize, Fabergé, and Tiffany all produced a spectacular array of animal jewels that are much prized today. Design developments throughout the twentieth century—Art Nouveau, Art Deco, and those that followed—contributed impressive animal jewelry, from Lalique's intricate insects to Cartier's panthers, from Boucheron and Van Cleef & Arpels to the sophisticated imagery of Verdura.

This book examines in detail the denizens of this jeweled menagerie. Great imagination and technical skill have gone into the fashioning of these precious objects, which exhibit not only meticulous craftsmanship but also grace, humor, and refinement.

Suzanne Tennenbaum is a noted collector of fine jewelry, and particularly of animal jewelry.

Janet Zapata served for many years as archivist of Tiffany & Co. and is the author of The Jewelry and Enamels of Louis Comfort Tiffany.