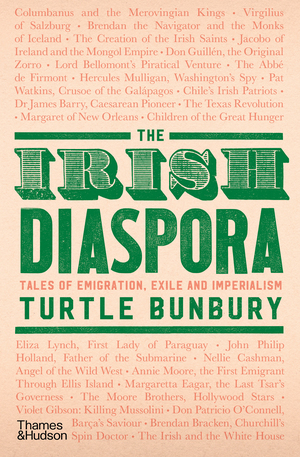 The compelling story of the great Irish pioneers who left their homeland and in the process profoundly influenced their adoptive countries.

From the first voyages of Saint Brendan in the early sixth century, an estimated 10 million people have left the Irish shores for other countries, and today, more than 80 million people worldwide claim Irish descent. In the centuries after the fall of Rome, Irish missionaries carried the word of the Christian God throughout Europe, while soldiers and mariners from across the land ventured overseas in all directions. The advent of the British Empire ignited a slow but extraordinary exodus from Ireland. These "Wild Geese" who opted to live outside of the Protestant state took their chances in the Spanish and French empires, as well as in the fledgling New World. These immigrants played an important role wherever they went: rising to high political and military positions in France and Spain, impacting the foundation of the United States, and fighting in the Civil War that followed it nearly eighty years later. Other Irish would come to the fore in business, science, engineering, and the arts, while some were destined for infamy as mobsters and gunslingers.

Historian Turtle Bunbury explores the lives of these men and women, great and otherwise, whose pioneering journeys beyond the Irish shore have played a profound role in world history and have left their indelible mark far beyond Ireland. Throughout The Irish Diaspora, Bunbury takes these overlooked events and characters and weaves them into an entertaining, and often surprising, history of the Irish abroad.

"This fascinating assortment of case histories, spread across 1,400 years and six continents, is an impressive feat of research. All of the chapters are based on a solid body of up-to-date historical writing. The summaries of often complex historical background to the lives explored are models of lucid compression. The short biographies themselves are lively yet judicious, packed with vivid detail but willing, where necessary, to question or dismiss colorful legend. And the reader will come away with a new sense of the many ways in which Ireland has interacted with the world beyond its shores, and of some of the extraordinary careers that have resulted."

Turtle Bunbury is an award-winning travel writer, historian, and author based in Ireland. He is the author of many books on Irish history, in particular the bestselling Vanishing Ireland series, with photographs by James Fennell, as well as The Irish Pub and Ireland’s Forgotten Past.