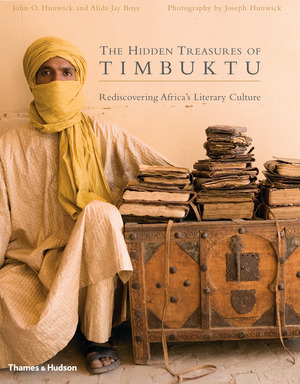 The extraordinary manuscripts of Timbuktu: invaluable historical documents, objects of tremendous beauty, and a testament to a great center of learning and civilization.

For centuries, trading caravans made epic journeys across the Saharan sands to reach the markets of the legendary city of Timbuktu, where they traded salt, gold, slaves, textiles—and books. By the mid-fifteenth century, Timbuktu had become a major center of Islamic literary culture and scholarship. The city's libraries were repositories of all the world's learning, housing not only works by Arab and Islamic writers but also volumes from the classical Greek and Roman worlds and studies by contemporary scholars.

The astonishing manuscripts of Timbuktu form the lavish visual heart of this book. Beautifully graphic, occasionally decorated, these exquisite artifacts reveal great craftsmanship as well as learning. All were written in the Arabic script, but not all are in Arabic, for they also feature a range of local African languages.

Aside from scholarly works, the surviving manuscripts include a wealth of correspondence between rulers, advisers, and merchants on subjects as various as taxation, commerce, marriage, divorce, adoption, breastfeeding, and prostitution, providing a vivid insight into the ordinary life and values of the day.

Alida Jay Boye is cofounder and coordinator of the University of Oslo’s Timbuktu Manuscripts Project.

John O. Hunwick has devoted a lifetime of scholarship to the history, culture, and literature of Islamic Africa.

Joseph Hunwick‘s images brilliantly capture the faded majesty of the city and the dignity and warmth of its modern-day inhabitants.