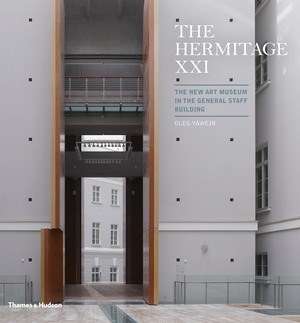 Founded in 1764 by Catherine the Great, the State Hermitage Museum is one of the world’s great museums. Occupying a large complex of six historic buildings along the Palace Embankment in St. Petersburg, its collections contain over three million items, including one of the largest collections of paintings in the world.

The decision to convert the eastern wing of the General Staff Building into a museum of nineteenth- and twentieth-century art to commemorate the 250th anniversary of the institution’s founding led to an international architectural competition. St. Petersburg-based Studio 44 won the commission over a field of globally renowned firms. The centerpiece of Studio 44’s elegant design scheme, which addresses both the project’s cultural significance and the needs of a twenty-first century museum, is an enfilade with hanging gardens that will enthrall visitors from around the world. The scale and dramatic outcome of the new building—the most important new cultural museum in Russia for a generation—is captured in this extensively illustrated publication that will inspire architects, museum visitors, curators, and anyone interested in the next chapter of Russia’s rich cultural heritage.

Give[s] readers a feel for the grand modern space. Will be appealing to those who work in managing space in art museums and to students in museum studies [and] readers interested in the fusion of historic and contemporary architecture.

impressive … a manual for respectfully adapting a historic building with an eye to the future.

Oleg Yawein is a founding partner and scientific consultant of Studio 44 Architects in St. Petersburg, and the director of the project for the restoration and conversion of the East Wing of the General Staff Building at the State Hermitage Museum.