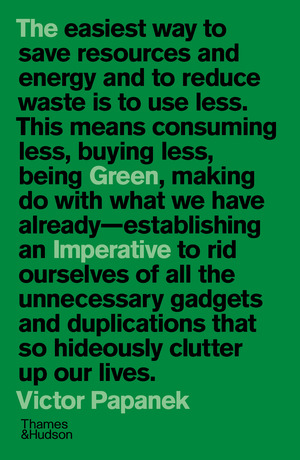 Whether it’s horror at the plastic littering the world’s beaches or despair at the melting polar ice caps, the world is gradually waking up to the impending climate disaster. In The Green Imperative, Papanek argues for design that addresses these issues head-on. This means using materials that can be recycled and reused, no more pointless packaging, thinking about how products make us feel and engage all our senses, putting nature at the heart of design, working at a smaller scale, rejecting aesthetics for their own sake, and thinking before we buy.

First published at the end of the twentieth century, this book offered a plethora of honest advice, clear examples, and withering critiques, laying out the flaws of and opportunities for the design world at that time. A quarter of a century on, Papanek’s lucid prose has lost none of its verve, and the problems he highlights have only become more urgent, giving today’s reader both a fascinating historical perspective on the issues at hand and a blueprint for how they might be solved.

Groundbreaking …Papanek introduced the idea of an ethics of design. Now …he reiterates his plea for ecologically sound design of everything from food packaging to buildings.

Victor Papanek was a distinguished designer, educator, and writer, widely praised for his visionary and strongly expressed ideas on design theory. Born in Vienna and educated in England before emigrating to the United States in the 1930s, he also spent time living with and learning from Navajo, Inuit, and Balinese peoples over the course of his career. He was the J. L. Constant Distinguished Professor at the School of Architecture and Urban Design at the University of Kansas at the time of his death in 1998.