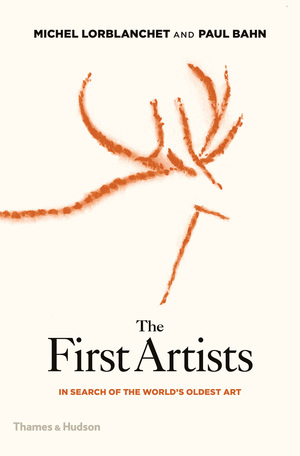 Two of the greatest living authorities on Ice Age art delve hundreds of thousands of years into the human past to discover the earliest works of art ever made, drawing on decades of new research

Where is the world’s very first art located? When, and why, did people begin experimenting with different materials, forms, and colors? Prehistorians have long been asking these questions, but only recently have they been able to piece together the first chapter in the story of art.

Overturning the traditional Eurocentric vision of our artistic origins, Paul Bahn and Michel Lorblanchet seek out the earliest art across the whole world. There are clues that even three million years ago distant human ancestors were drawn to natural curiosities that appeared representational, such as the face-like “Makapansgat cobble" from South Africa, not carved but naturally weathered to resemble a human face. In the last hundred thousand years people all over the world began to create art: the oldest known paint palettes in South Africa’s Blombos Cave, the famous Venus figures across Europe all the way to Siberia, and magnificent murals on cave walls in every continent except Antarctica.

This book is the first to assess the discovery, history, and significance of these varied forms of art: the artistic impulse developed in the human mind wherever it traveled.

Paul Bahn is co-author of Thames & Hudson’s hugely influential and bestselling textbook Archaeology: Theories, Methods and Practice, and has also published a variety of popular books, including Easter Island: Earth Island (with John Flenley), Mammoths: Giants of the Ice Age (with Adrian Lister), and Images of the Ice Age, widely regarded as the standard introduction to cave art.

Michel Lorblanchet is a leading French specialist in the field of Palaeolithic art. In his former role of Director of Research at the French National Center for Scientific Research (CNRS) he pioneered experimental methods of reproducing, as well as scientific methods of dating, ancient art. His Art pariétal: Grottes ornées du Quercy, the sum of 45 years of research, is considered the definitive work on the art of the Quercy region, which includes more than thirty painted caves.

Pierre Soulages is a French painter, engraver, and sculptor.