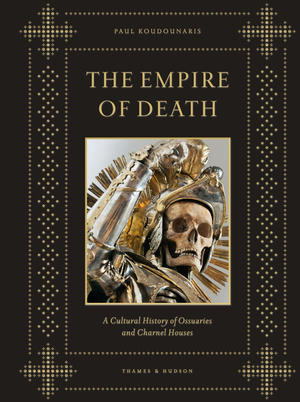 From bone fetishism in the ancient world to painted skulls in Austria and Bavaria: an unusual and compelling work of cultural history.

It is sometimes said that death is the last taboo, but it was not always so. For centuries, religious establishments constructed decorated ossuaries and charnel houses that stand as masterpieces of art created from human bone. These unique structures have been pushed into the footnotes of history; they were part of a dialogue with death that is now silent.

The sites in this specially photographed and brilliantly original study range from the Monastery of Santa Maria delle Grazie in Palermo, where the living would visit mummified or skeletal remains and lovingly dress them; to the Paris catacombs; to fantastic bone-encrusted creations in Austria, Cambodia, the Czech Republic, Ecuador, Egypt, Germany, Greece, Italy, Peru, Portugal, Serbia, Slovakia, Slovenia, Spain, Switzerland, and elsewhere.

Paul Koudounaris photographed more than seventy sites for this book. He analyzes the role of these remarkable memorials within the cultures that created them, as well as the mythology and folklore that developed around them, and skillfully traces a remarkable human endeavor.

…an astounding achievement, both as a literary and photographic work.

Koudounaris gracefully transcends mere ghastliness and ghoulishness to challenge cultural perceptions of death, both current and centuries old. The result is not only a highly original work of great visual beauty and rigorous scholarship but also a surprisingly intimate and tender meditation on what the author calls 'the dialogue with the dead.'

The photos of the skulls alone justify the purchase.