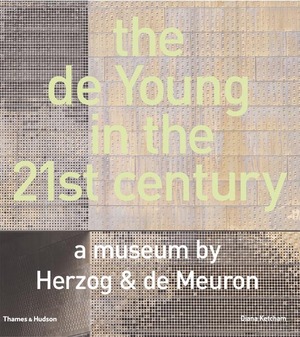 A fascinating architectural study in museum design and urban planning.

Founded by San Francisco Chronicle publisher Michael de Young, the museum originated in the Midwinter International Exposition of 1894 and grew to become the city's largest art museum. Its superb permanent collection includes the arts of Africa, Oceania, and traditional cultures of the Americas; American painting and sculpture from the colonial period to the present; and both Western and non-Western textiles.

After the de Young was damaged in the 1989 Loma Prieta earthquake, the museum's fateand the decision to replace the old building with a new museum on the same sitebecame the focus of intense public debate. How Herzog & de Meuron, in cooperation with the San Francisco firm of Fong & Chan Architects and Oakland-based landscape designer Walter Hood, responded to the challenge of creating a building in harmony with its park setting is an important theme of the story.

Lavishly illustrated with color photographs as well as plans, drawings, and models, the book traces the architects' creative process in striking detail. The new de Young is significant as Herzog & de Meuron's first major building in North America and as the first museum the architects have designed from the ground up. Reflecting its surroundings, the building is clad entirely in a skin of dimpled and perforated, naturally oxidized copper panels, whose abstract pattern was distilled from manipulated photographs of the park's tree canopy. With its elegant, twisting tower rising above the tree line, providing visitors with dramatic views, the de Young is a superlative work of architecture and a handsome tribute to the city of San Francisco. 250 illustrations, 200 in color.