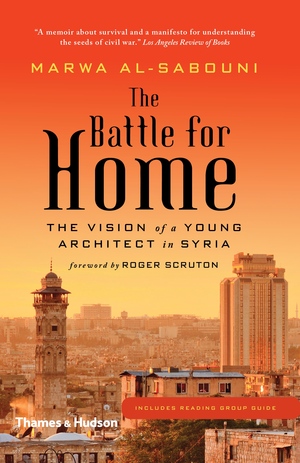 “Sabouni’s elegy to her devastated town, a memoir about survival, and a kind of manifesto, stressing the importance of architecture and urbanism for our understanding of the deeper roots of Syria’s conflict . . .”—Los Angeles Review of Books

Drawing on the author’s personal experience of living and working as an architect in Syria, this timely and fascinating account offers an eyewitness perspective on the country’s bitter conflict through the lens of architecture, showing how the built environment and its destruction hold up a mirror to the communities that inhabit it.

From Syria’s tolerant past, with churches and mosques built alongside one another in Old Homs and members of different religions living harmoniously together, the book chronicles the recent breakdown of social cohesion in Syria’s cities. With the lack of shared public spaces intensifying divisions within the community, and corrupt officials interfering in town planning for their own gain, these actions are symptomatic of wider abuses of power.

With firsthand accounts of mortar attacks and stories of refugees struggling to find a home, The Battle for Home is a compelling explanation of the personal impact of the conflict and offers hope for how architecture can play a role in rebuilding a sense of identity within a damaged society.

An architectural memoir about the devastating civil war raging in Syria for the past six years, The Battle for Home argues passionately for architecture's pivotal role in shaping social realities. Marwa al-Sabouni, a young and ambitious architect still defiantly living in her severely destroyed city of Homs with her husband and two children, uses her own autobiography and architectural sensibility to tell a selective history of her native city, and of Syria more generally, down to the excruciating present. The book is divided into six chapters, each cast as a battle with one of several facets of what is in the end the same enemy: predatory change motivated by greed, bad taste, and misguided Modernism. That detrimental change—which left huge swaths of economic inequality, urban underdevelopment, and ethical privation—directly contributed to the breakdown of Syrian society. Al-Sabouni's ink sketches in freestyle both illustrate her arguments and subtly push them further. For instance, she uses thick lines in depicting an urban redevelopment proposed by the authorities after the destruction of Baba Amr, which emphasizes the brutality of the intervention. Her own clever project for the same reconstruction, inspired by an organicist reading of traditional architecture, is rendered with various thicknesses that enhance its spatial complexity. A softer touch is reserved for the historical and vernacular examples that al-Sabouni favors.

Roger Scruton is a writer and philosopher. His books include The Dictionary of Political Thought, A Land Held Hostage: Lebanon and the West, and The Aesthetics of Architecture.