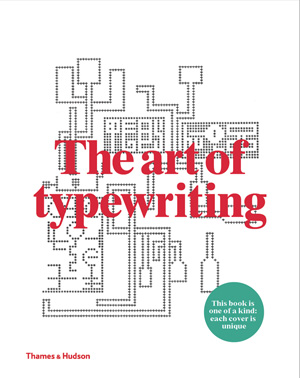 The beloved typewriter—its utilitarian beauty, the pleasing percussive action of striking its keys, the singularity of the impressed page—is enjoying a genuine renaissance across the creative industries.

In this authoritative publication, the founders of the Sackner Archive of Visual and Concrete Poetry, the largest such collection in the world, apply their experience, mining the collection they have created over four decades to present examples produced by more than 200 of the world’s finest typewriter artists. From the early ornamental works produced by secretaries in the late nineteenth century to more recent works that consider the unique position of the typewritten document in the digital age, there is an astonishing and delightful range of creativity in every artwork.

The Art of Typewriting features three main sections: an introduction to the history of the typewriter and its art; an expansive plate section showing key works rendered in exquisite detail; and a reference section featuring biographies of the genre’s most influential artists and writers. The book’s layout has been created by London’s leading graphic design studio, Graphic Thought Facility, and each book has a cover with a unique combination of front and back image, meaning no two books are the same.

Creating art with a typewriter—a seemingly limited machine—was both an exercise in mind-boggling ingenuity and an acceptance of restrictions that seem out of joint with our era of Koonsian scale and Abramovicían ego. With more than five hundred illustrations, THE ART OF TYPEWRITING offers a sample of the quarter-million items in the Sackner Archive of Concrete and Visual Poetry in Miami—said to be the largest extant repository of such material—preceded by brief, illuminating histories of typewriter art and ornamentation.

In an age of computer-driven word processing—Microsoft Word, Google Docs—the works here make for an especially prescient presentation. Time, energy, and struggle are evident in many of the pieces shown in The Art of Typewriting.

These creations are sophisticated works that wouldn't be out of place in a modern art museum.

The Art of Typewriting destabilizes linear communication as words become objects and shared languages fragment… In the age of Microsoft Word, the typewriter has a nostalgic appeal, yet these works appear to exist outside time and place… The Sackners don't arrange the works geographically, chronologically or by artist but rather thematically: 'alphabetical texts,' 'texts of varying densities,' 'meandering texts and labyrinths.' The effect is a subtle, Zen-like respite from meaning, a calm in the midst of our communicative storm.

This is an undeniably rich and plentiful repository of creativity….There's much to explore here for art historians, poets, linguists, book artists, and those simply curious about the multiplicity of ways that text can take on fascinating forms.

Marvin and Ruth Sackner are typewriter art collectors based in Miami, Florida. Today the Sackner Archive of Visual and Concrete Poetry is the world’s largest collection of its kind, housing tens of thousands of pieces from hundreds of artists and writers from around the world.