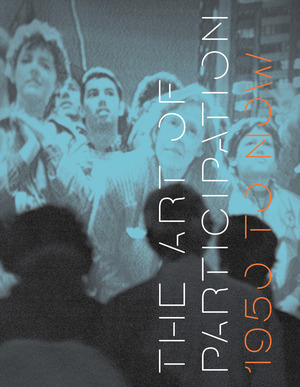 The first fully illustrated survey of participatory art and its key practitioners, published in association with the San Francisco Museum of Modern Art.

Original essays by Rudolf Frieling, Boris Groys, Robert Atkins, and Lev Manovich identify seminal moments in participatory practice from the 1950s to the present day. A rich array of plates introduce work by all the artists in the accompanying exhibition, with reproductions of significant projects by other major figures—from Helio Oiticica, Joan Jonas, and Gordon Matta-Clark to Rirkrit Tiravanija and SUPERFLEX—rounding out the survey.

The Art of Participation excels as an exhibition catalogue and as a concise overview of recent participatory art…The catalogue's layout and design thoughtfully and playfully reinforces the intent of the exhibition.

Participatory art embraces us. If you're ready to reciprocate, this collection is for you…an exceptional coffee-table book.

Robert Atkins, an art historian and writer, is a frequent contributor to Art in America and a former staff columnist for the Village Voice. Atkins is an authority on digital art, queer art and culture, and Chinese contemporary art. He is a pioneering online media producer and a founding member of Visual AIDS, creators of Day With(out) Art and the Red Ribbon. His other books include ArtSpoke and Censoring Culture.

Boris Groys is Professor of Aesthetics, Art History, and Media Theory at the Center for Art and Media Technology in Karlsruhe, and since 2005, the Global Distinguished Professor in the Faculty of Arts and Science, NYU. He has published numerous books including The Total Art of Stalinism, Ilya Kabakov: The Man Who Flew into Space from His Apartment, Art Power, and The Communist Postscript.