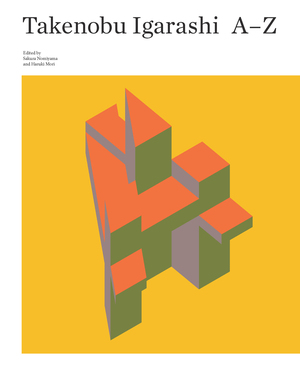 A complete retrospective of the work of Takenobu Igarashi, Japan’s ingenious master of hand-drawn, three-dimensional typography.

In the mid-1970s, designer Takenobu Igarashi began a prolific, decade-long exploration into the possibilities of three-dimensional typography. His first experiments with lettering—heavily influenced by the avant-garde typography of the 1920s—appeared on magazine covers, posters, and record sleeves. Timeless and technically dazzling, Igarashi’s signature style demonstrates his mastery of three-dimensional forms and perspective, refined long before the introduction of computers into the design industry.

Takenobu Igarashi A–Z offers a comprehensive guide to Igarashi’s experimental typography, featuring not only his most celebrated works, but also a first look at archival plans, drawings, and production drafts for his iconic designs. From his early print works and hand-drawn experiments to self-initiated sculptural pieces and high-profile 3-D identities for international clients and institutions, this book is a long-overdue survey of one of the most ingenious graphic designers of the twentieth century.

Sakura Nomiyama is a Design Historian. She has worked as a freelance design researcher and curator, most recently contributing to the ‘Marcel Breuer’s Furniture’ exhibit at the National Museum of Modern Art, Tokyo.