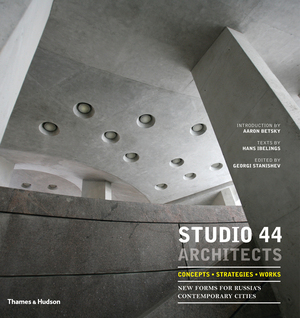 Studio 44 Architects is one of the largest private architectural firms in St. Petersburg and in Russia. Founded in 1991 and led by Nikita Yawein, the company now employs over 140 highly qualified specialists, including architects, restoration experts, structural designers, and engineers. Studio 44 has won over sixty prestigious awards and implemented over twenty-five public and residential building projects, including Ladozhsky Railway Station, the Atrium Business Centre at Nevsky 25, Nevsky 38 and Linkor business centers, the Grand Palace shopping gallery, the Novy Peterhof hotel, and the Boris Eifman Dance Academy in St. Petersburg; the Palace of Schoolchildren in Astana (Kazakhstan); and the Olympic Park Railway Station in Sochi.

Studio 44 Architects provides a detailed look at the thirty-five projects that the firm completed from 2000 to 2015 as well as an overview of the earliest projects and the birth of the firm.

Hans Ibelings is a Montreal-based architectural historian and critic, and the editor and publisher of The Architecture Observer.

Georgi Stanishev is an architect, publicist, and editor based in Sofia.