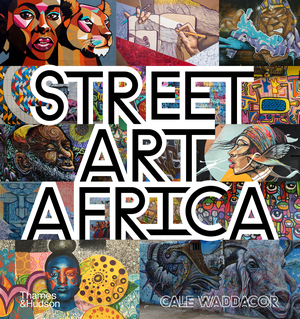 Dedicated to the visually dazzling world of African street art, this volume surveys the work of dozens of artists from across the continent.

This visually rich survey showcases the work of over two hundred artists from more than forty countries as it explores and celebrates street art in Africa over the last decade. In Street Art Africa, readers can reflect on works such as the monumental Murais da Leba in Angola—a nearly 20,000-square-foot expanse of wall covered by local graffiti and visual artists in the Serra da Leba mountain range—and learn more about the idiosyncrasies of individual street art scenes and how they mesh with local communities, such as eL Seed’s project “Perception”: a huge multipart mural stretching across more than  fifty buildings in Cairo’s Zaraeeb neighborhood that provides a message of hope to marginalized communities.

Featuring in-depth interviews with street artists active in Africa today, as well as coverage of the continent’s major street art projects, collectives, and festivals, this book introduces the reader to the leading  figures and hot-spots in African street art. With detailed commentaries on style, processes, and social and cultural context, Street Art Africa provides readers with a wealth of insight into contemporary visual cultures on the continent and is a must-have for street art fans and practitioners.

Cale Waddacor is a South African artist, musician, photographer, and documentarian. He began photographing street artworks to document the country’s rising street art scene and launched the website Graffiti South Africa, which was made into a book of the same title in 2014.