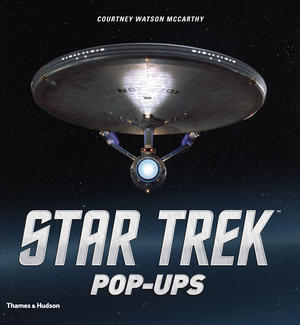 A legendary sci-fi epic as you’ve never seen it before—including the Klingon Bird of Prey, the Bride of Chaotica, and the Enterprise herself, all literally bursting off the page

Star Trek is one of the most enduring franchises in Hollywood entertainment history. Part of the public consciousness since 1966, it spans the worlds of television and the movies and counts millions of fans worldwide. Now Star Trek Pop-Ups delivers seven iconic Star Trek moments in a new way—popping off the page in three dimensions. From the original USS Enterprise in flight to the dreaded Borg cube from The Next Generation and beyond, here is an unforgettable series of alien encounters and thrilling action scenes, featuring memorable moments from Deep Space Nine, Voyager and Enterprise. Bursting with energy and ingenuity, Star Trek Pop-Ups will capture the imaginations of fans young and old.