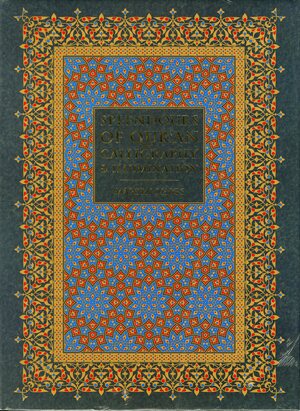 The finest examples of this distinctive Islamic art form ever published.

Within three centuries of its advent, Islam had produced an architecture and a calligraphic art, including that of illumination, that have seldom been equaled and never surpassed, the one centered on the Mosque and the other on the Qur'an. But whereas Islamic architecture is world famous, its calligraphic art has remained relatively unknown and inaccessible. Black-and-white photographs of the art of calligraphy are plentiful, but a page of script, impressive though it can be in black and white, loses much without the tints of the paper and the ink.

Splendours of Qur'an Calligraphy and Illumination reproduces the formal excellence of colors and texture that distinguish these artistic masterpieces. In all, 180 openings are displayed, carefully chosen from the greatest collections of Qur'an manuscripts in the world.

Martin Lings lectured at Cairo University for twelve years, and served as Keeper of Oriental Manuscripts at the British Museum.