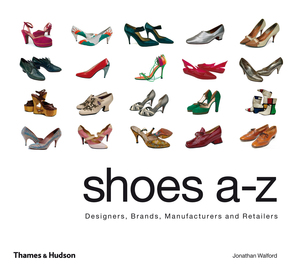 A brilliantly illustrated compendium of shoe designers, brands, manufacturers, and retailers since 1950.

“I did not have three thousand pairs of shoes. I had one thousand and sixty.”—Imelda Marcos

In recent years shoes have become objects of fanatical devotion, as covetable designs have gained iconic status and shoe designers have become heroes of popular culture. From Christian Louboutin’s signature red sole and the Manolo Blahnik heels that helped to define Sex and the City’s Carrie Bradshaw to the eco-friendly footwear of the future, shoes are now a fashion statement all their own.

Is there such a thing as a leading shoe fashion anymore? The silhouettes, colors, and details on the feet of models and in the pages of fashion magazines used to be the ultimate in style, but they no longer represent all fashion footwear any more than haute couture represents all fashionable clothing. Renowned fashion specialist Jonathan Walford recounts the fascinating history of more than 350 leading women’s shoe designers and manufacturers who have shaped modern footwear over the last sixty years. A rich array of sketches, photographs, and advertisements highlight superlative craftsmanship and lasting trends.

Jonathan Walford was the founding curator of the Bata Shoe Museum in Toronto and a founder of the Fashion History Museum in Canada. His previous books include Forties Fashion. He lives in Canada.