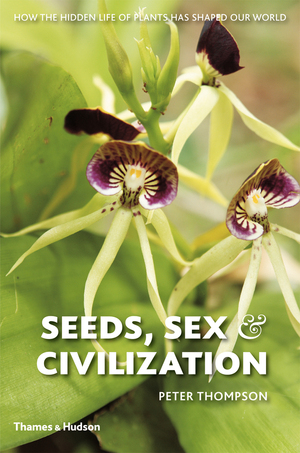 The history of civilization told through the story of man’s relation to and use of seeds.

Seeds have influenced evolution, and for millennia they have influenced and sometimes determined where and how we live. This is an epic tale, given added enchantment by the fact that to most of us seeds mean little more than tiny objects in paper packets: who thinks first of rice, wheat, coffee, nuts, peas, beans, or olives? Here, Peter Thompson unfolds the absorbing history of how, after centuries of investigation, we finally discovered what seeds do and how they work.

This is a scientific detective story with heroes and heroines following clues and finding answers. Thompson brings to life the eccentrics, explorers, amateurs, and highly dedicated professionals who have accumulated our knowledge. Some are well known, such as Charles Darwin and Gregor Mendel; others, like the Russian geneticist Nikolai Vavilov, are less so. The seeds also have a story and appear to have personalities, ambitions, and “stratagems” of their own.

The book concludes with a chapter by Stephen Harris on current debates about genetically modified crops, seed conservation, and plant ownership in the contemporary world.

Peter Thompson, for many years the Head of Plant Physiology at the Royal Botanic Gardens, Kew, and a pioneer in the conservation of threatened plant species, laid the foundations for the Millennium Seed Bank.

Stephen Harris is Druce Curator of the Oxford University Herbaria and a Fellow of Green Templeton College.