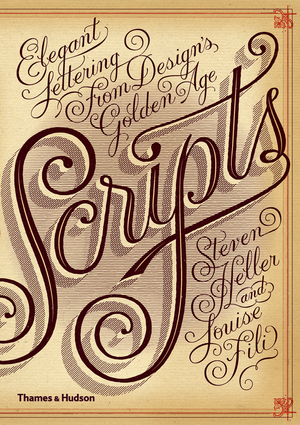 “For a type nerd, the only thing missing from Scripts is a centerfold of voluptuous Spencerian. . . . About ninety percent of the book is images, glorious images.” —Communication Arts

Seen in everything from wedding invitations and birth announcements to IOUs, menus, and diplomas, script typefaces impart elegance and sophistication to a broad variety of texts. Scripts never go out of style, and the hundreds of inventive examples here are sure to inspire today’s designers. Derived from handwriting, these are typefaces that are stylized to suggest, imply, or symbolize certain traits linked to writing. Their fundamental characteristic is that all the letters, more or less, touch those before and after. Drawn from the Golden Age of scripts, from the nineteenth to the mid-twentieth century, this is the first compilation of popular, rare, and forgotten scripts from the United States, Germany, France, England, and Italy. Featuring examples from a vast spectrum of sources—advertisements, street signs, type-specimen books, and personal letters—this book is a delightful and invaluable trove of longoverlooked material.

Heller and Fili's illustrated collection of historical letterforms found in ephemera from around the world will inspire patrons who seek distinct scripts or anyone practicing the art of calligraphy.