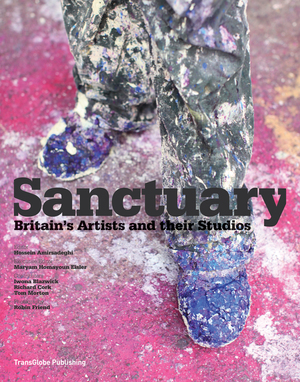 From Botticelli to Bacon, da Vinci to Damien Hirst, artists have invested their personalities in the environments in which they have worked. Although today numerous artists have abandoned the studio model in favor of new modes of working enabled by new technologies, the studio space, often containing the visible remains of artistic ingenuity, toil, and torment, continues to present a window into the creative soul and a summary of widely varying methods and approaches.

Sanctuary: Britain’s Artists and their Studios is the first publication in half a century to look behind the scenes at both artists’ working lives and their workplaces, encouraging them to speak, delving into their minds and exploring their methodologies and personalities. Surveying 120 renowned artists living and working in Britain today, from the most noteworthy to new, upcoming talent, Sanctuary offers a visual feast of specially commissioned photography while following each artist through their working routines. Tony Cragg, Anthony Gormley, Jenny Saville, Anish Kapoor, Mark Wallinger, Phyllida Barlow, Jane and Louise Wilson, Thomas Houseago, Tracey Emin, the Chapman Brothers… the list goes on. In addition to highly individualized interviews with all of the artists featured in the book, the stage is set by three highly engaging essays exploring the meanings, configurations, and personalities of a huge range of studio settings and environments in the context of the contemporary British art scene.

Offers a rare glimpse into the work spaces of 120 of today's most creative minds.

Features in-depth interviews with artists as well as gorgeous photography.

Iwona Blazwick is Director of the Whitechapel Gallery in London and the former Head of Exhibitions and Displays at Tate Modern. She is the author of Faces in the Crowd: Picturing Modern Life from Manet to Today, Tate Modern: A Handbook, and Cornelia Parker.

Robin Friend has exhibited internationally and was nominated for the prestigious Prix Pictet Award in 2010.