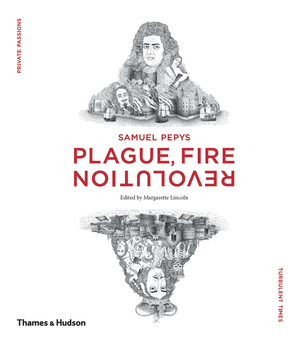 The life, career, and world of Samuel Pepys, lavishly illustrated and published to coincide with an exhibition at the National Maritime Museum

Samuel Pepys (1633–1703) lived through one of the most exciting and troubled periods in English history. He saw the people rise up in the name of liberty and execute their king. During the plague of 1665 he endured months of terror, and the following year he witnessed the Great Fire of London. Toward the end of his life, Pepys—and the country—suffered further upheaval when his patron, the Catholic James II, was ousted by the Protestant William III and Queen Mary in the “Glorious Revolution” of 1688.

Published to coincide with an exhibition at the National Maritime Museum in Greenwich, UK, this engaging portrait explores the public and personal worlds of Pepys, not only a famous diarist whose description of the Fire of London is unequaled but also an energetic and talented man who rose from modest beginnings to become the greatest naval administrator of the age.

An introduction by Pepys’s award-winning biographer, Claire Tomalin, engaging essays on every aspect of his life and world, and illustrations that include a rich variety of paintings, engravings, and objects make this an unprecedented look at a remarkable man.

Claire Tomalin is a former literary editor of the New Statesman and the Sunday Times and is a highly acclaimed biographer. Her biography of Pepys, Samuel Pepys: The Unequalled Self, won the 2002 Whitbread Book of the Year award.

Dr. Margaret Lincoln was Deputy Director at the National Maritime Museum, 2007-15, and is now a Visiting Fellow at Goldsmiths. Her books include Representing the Navy: British Sea Power 1750-1815, Navel Wives and Mistresses 1745-1815, and Pirates and British Society, 1680-1730. She is currently working on a peoples history of maritime London, 1768-1802.