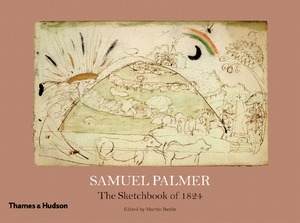 A facsimile edition of the only surviving sketchbook by this visionary Romantic painter, published to coincide with a retrospective exhibition of Palmer's work.

Child prodigy Samuel Palmer was just fourteen years old when he first exhibited at London's Royal Academy in 1819. A delicate and withdrawn child, he experienced intense and disturbing visions as a boy, while developing a love of the Bible and poetry that remained a lifelong inspiration for his art. Under the tutelage of William Blake and John Linnell, he became the most visionary and mystical landscape painter of the Romantic era in England.

This beautiful volume is a facsimile of the only sketchbook by Palmer in existence. Its pages vividly illustrate the crucial period when Palmer was a nineteen-year-old artist in rural Kent trying to establish his mature style. Religious fervor, the influence of Linnell, and the inspiration of Blake all combined to reveal to Palmer a vision of a divinely ordered heaven on Earth located in the landscape. No other surviving source provides such an immediate record of Palmer's processes of discovery, or gives such insight into the self-searching, artistic, and spiritual struggles that were soon to be resolved in his celebrated moonlit landscapes of the 1820s and 1830s.

All of the sketchbook's 162 surviving pagesnewly photographed in color, finely reproduced, and printed on paper resembling that of the originalare presented in their original sequence and at their actual size. Martin Butlin provides authoritative page-by-page commentaries, notes, and an introduction to Palmer's life, while William Vaughan places the sketchbook in the context of the art and aesthetic of its time. 160 color illustrations.