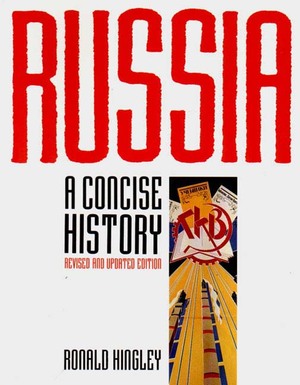 Tremendous changes in Russia have enhanced the special fascination which this powerful, enigmatic country has so long held for the world at large.

Russia's history, from her beginnings as a pagan Slav community centered on Kiev to superpower status, has its own unique rhythm. Appalling calamities have shaped Russia: the Time of Troubles; the Napoleonic invasion; two world wars separated by a great civil war; a multitude of famines and epidemics. Not least among these scourges have been leaders such as Ivan the Terrible and Joseph Stalin.

In this revised and updated edition, Ronald Hingley considers the recent astonishing developments: the first steps towards liberalization, the collapse of communist rule throughout Russia's former satellite states, and above all the demise of Soviet communism and the disintegration of the USSR.

Russia's present can be better comprehended as the latest chapter in a long and enthralling history; a history—evoked here with the aid of over 200 illustrations—which is now being energetically reassessed by the Russians themselves.

Ronald Hingley copes with the complexities and the vastness with admirable clarity.

No better introduction to this restless and turbulent country.

Dr. Ronald Hingley, Emeritus Fellow of St Antony’s College, Oxford, has written many books on Russia, including The Russian Mind, and is translator and editor of The Oxford Chekhov.