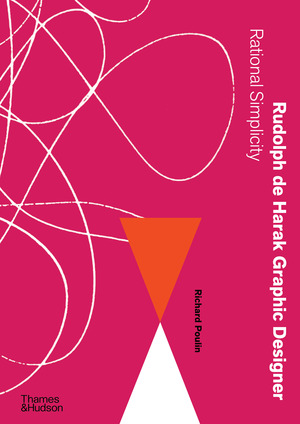 Rudolph de Harak (1924-2002) is one of the most influential graphic designers of the mid-twentieth century. This beautifully produced, comprehensive monograph is devoted to this fascinating and significant figure and provides an in-depth account of de Harak’s life and work.

From his early years in Los Angeles to his success as a design consultant and educator in New York City, de Harak brought inventiveness to everything he designed, from record covers to book jackets, from furniture to exhibitions. De Harak’s work was influenced by early modernist masters, such as Will Burtin, Gyoërgy Kepes, Alvin Lustig, and Max Bill, as well as by the rigor, simplicity, and rationalism of the International Style, Abstract Expressionism, Op Art, and Pop Art.

Organized chronologically into six chapters that cover de Harak’s life and career, each supported by sidebars on the designers, architects, and art movements that have influenced his work, Rudolph de Harak Graphic Designer documents de Harak’s pioneering and prolific fifty-year career in graphic, experiential, industrial, and furniture design for a wide range of clients, including the Metropolitan Museum of Art, Cummins engine company, McGraw Hill publishing, and many others.

Rudy de Harak is a solid link between American and Swiss modernism. He was an exemplar of minimalist form with a conceptual content. A book on his life and work is sorely needed and long overdue.

Richard Poulin is a designer, educator, author, and artist. Throughout his career he has focused on a generalist approach to all aspects of design, including graphic, environmental, interior, and exhibition design, dividing his time between professional practice and academia. For over 30 years, he was Design Director and Managing Partner for the internationally-recognized multidisciplinary design consultancy Poulin + Morris Inc. which he co-founded in New York City in 1989 with Douglas Morris. As a highly-respected educator, he taught at Cooper Union and the School of Visual Arts for over two decades, is a frequent lecturer at colleges and universities, a contributor to design publications in the United States and abroad, and a recipient of a research grant in design history from the Graham Foundation for Advanced Studies in the Fine Arts. In 2005, Richard was made a Fellow of the Society of Experiential Graphic Design (SEGD), the profession’s highest honor. His work has been published in periodicals and books internationally and is in the permanent design collections of the Denver Museum of Art, Library of Congress, and Los Angeles County Museum of Art (LACMA). He is the author of several books on graphic design, typography, and design history which have been translated into eight languages and used by students and practitioners worldwide. Richard lives in Palm Springs, California.