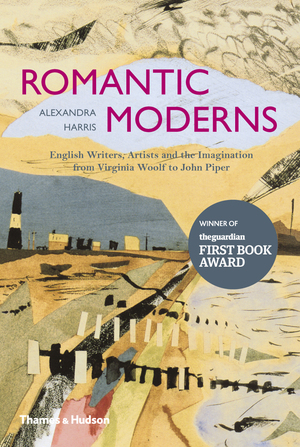 Winner of the 2010 Guardian First Book Award: a groundbreaking reassessment of English cultural life in the thirties and forties.

In the 1930s and 1940s, while the battles for modern art and modern society were being fought in Paris and Spain, it seemed to some a betrayal that John Betjeman and John Piper were in love with a provincial world of old churches and tea shops.

Alexandra Harris tells a different story: eclectically, passionately, wittily, urgently, English artists were exploring what it meant to be alive at that moment and in England. They showed that “the modern” need not be at war with the past: constructivists and conservatives could work together, and even the Bauhaus émigré László Moholy-Nagy was beguiled into taking photos for Betjeman’s nostalgic An Oxford University Chest.

A rich network of personal and cultural encounters was the backdrop for a modern English renaissance. This great imaginative project was shared by writers, painters, gardeners, architects, critics, and composers. Piper abandoned purist abstracts to make collages on the blustery coast; Virginia Woolf wrote in her last novel about a village pageant on a showery summer day. Evelyn Waugh, Elizabeth Bowen, and the Sitwells are also part of the story, along with Bill Brandt and Graham Sutherland, Eric Ravilious and Cecil Beaton.

A brilliant piece of work that manages to be both comprehensive and coherent as it tells a compelling story about 20th century English art… a significant contribution to the history of English culture.