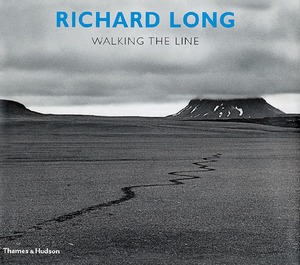 This book by and about the sculptor and pioneer land artist Richard Long explores his work from the 1990s to the present day. Long’s ability to make works of physical and intellectual beauty in both outdoor and indoor spaces is unrivaled, and the journey covered here takes the reader around the world: to the Sahara Desert and down the Rio Grande, from coast to coast in Ireland and Spain, to Tierra del Fuego and Mongolia, and to the forests of Honshu in Japan. Some of the artist’s sculptures were made during his walks through the world’s landscapes, while others bring the materials of naturestones, boulders, driftwood, clay, and mudinto museums, galleries, houses, and gardens. These works feed the senses, whereas the texts and photographs recording the artist’s walks feed the imagination. Majestic museum pieces made from tons of rock are juxtaposed with dramatic mud works and photographs recording ephemeral sculptures often made in the remote wilderness. Most of the photographs were taken by the artist himself, and the book also includes his notes and writings. If walking has become Long’s trademark, the path is perhaps the central image or archetype in his work. The idea of the path or way has meaning in all culturesfrom the most material to the most spiritual. It is both real and symbolic, whether it is a life, a road, or the Taoist “Great Way.” With his walks, Richard Long weaves a line through many traditions, creating an art that is both timeless and universal. 248 illustrations in color and duotone.

Sir Richard Long, CBE, is one of Britain’s foremost sculptors and land artists. Short-listed four times for the Turner Prize, he won the award in 1989 for White Water Line. He was elected to the Royal Academy of Arts in 2001 and for more than fifty years his work has been exhibited at major galleries throughout the world. Richard Long lives and works in Bristol, the city in which he was born.