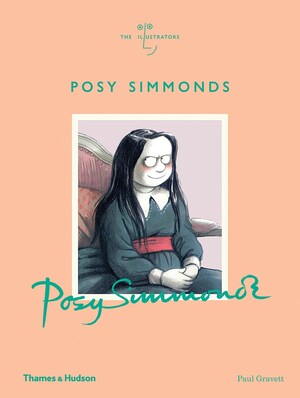 An inaugural volume in a new series showcasing the most significant illustrators of the modern era, this book explores the satirical cartoons of Posy Simmonds.

Illustrator Posy Simmonds is known for her extraordinarily precise drawings, keen powers of observation, and sharp but well-tempered wit, all of which have made her an internationally renowned artist.

This generously illustrated book examines Simmonds’s life and work from early childhood to the present day, offering insights into her creative process. Paul Gravett has had unprecedented access to her archive and includes pages from her sketchbooks as well as rare or never-before-seen artwork. The portrait of Simmonds that emerges underlines her role as a keen chronicler and critic of contemporary British society—a storyteller who writes and illustrates with rare perception and humanity.

Posy Simmonds is one of the first titles in Thames & Hudson’s new The Illustrators series, which celebrates illustration as an art form. The book will appeal to the many fans of Simmonds’s work, and anyone interested in illustration will adore this unrivaled exploration of a sophisticated innovator.