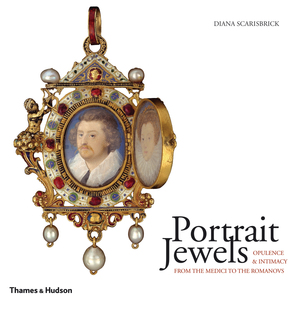 A richly illustrated and fascinating book of jewels and gems that will appeal to anyone interested in the history of jewelry, portraiture, and European culture.

From the Renaissance to the end of the Belle Epoque, cameo, intaglio, and miniature portraits, prized as representations of eminent people or treasured as images of the beloved, have been enriched by jeweled frames in order to wear them or display them as precious objects.

Rulers from the Medici to the Romanovs commissioned portrait jewels. Dynasties represented here include the Valois and Bourbon in France; Bavarian, Habsburg, and Hanoverian in Germany, Central Europe, and Spain; Tudor, Stuart, and Hanoverian in Britain; and the House of Orange-Nassau in the Netherlands. Men and women famous in politics, religion, history, literature, and the arts, including Queen Elizabeth I, Louis XIV, Catherine the Great, Voltaire and Madame du Ch\xc3\x83\xc2\xa2telet, Popes Clement XII and Pius VII, and Lord Byron are featured in this exquisite miniature gallery.

The author draws upon her knowledge of jewelry, painting, history, and literature to set the portrait jewels in the context of people’s lives, and shows how they were worn and what they meant to donors and recipients—tokens of allegiance to a ruler, of commitment between lovers, of affection within families.

[The author's] art historian background and her specialty in the history of engraved gems and jewelry makes for an authoritative world coverage key to any serious jewelry or art history holding.

Diana Scarisbrick is an art historian specializing in the history of engraved gems and jewelry. Her publications include Rings: Jewelry of Power, Love and Loyalty and Portrait Jewels: Opulence and Intimacy from the Medici to the Romanovs.