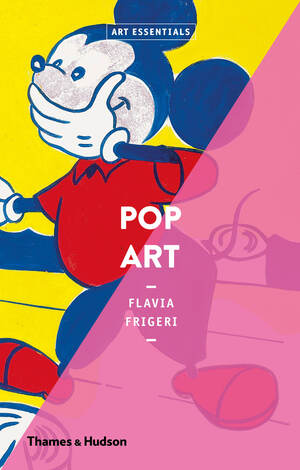 This new installment in the Art Essentials series is an indispensable guide for anyone fascinated by the pop art movement.

Pop Art refers to a post-war movement connecting art with popular culture. Billboard signs, comic books, and movie stars were just some of the subjects chosen by pop artists, such as Andy Warhol, Roy Lichtenstein, James Rosenquist, and Claes Oldenburg, to name a few, to illustrate the contemporary world in which they lived. Largely characterized by bold and strident colors combined with a cool-eyed appropriation of contemporary imagery, pop art sought to highlight both the negative and positive facets of modern culture.

The newest installment in the Art Essentials series explores this phenomenon, which had its roots in post-war British and American consumerism before spreading and capturing the imagination of young artists. After establishing the origins of the form, the book delves into subjects like the role of stardom and glamor in pop art and how pop art vocabulary grew to include political figures and even war imagery.

As written by Flavia Frigeri, an authority on the subject, this book is an essential guide for anyone fascinated by the pop art movement.

Flavia Frigeri is an art historian, curator, and teaching fellow at University College London. Frigeri is the author of Pop Art and Women Artists, both in Thames & Hudson’s Art Essentials series.