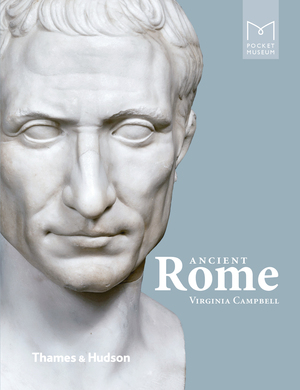 A detailed exploration of nearly 200 objects from ancient Rome and museum collections around the world, gathered here into one handy, pocket-sized guide

Pocket Museum: Ancient Rome brings together nearly 200 of the finest and most significant artifacts preserved in museums today—many of which could never be seen side by side—which serve to illustrate the social and cultural history of ancient Rome. These objects tell the story of the origin of the Roman state (Latium) from the Early Iron Age cultures of Etruria and the pseudo-historical “period of the kings” (753–509 BCE), through to the end of the Late Empire in the West in 476 CE. Over a period of more than 1,000 years, Roman culture evolved administratively, socially, and politically, with many elements still recognizable in the sociopolitical infrastructure of the modern Western world.

Richly illustrated with detailed photographs of every object, the informative text reveals how each artifact is a key object in its own right—a creation that commemorates a great event or heralds the start of a new era in creativity or politics. From coins of the fifth century BCE to pottery made at the time of the fall of the Western Roman Empire in 476 CE, all the objects reveal an important insight into this highly influential ancient civilization.