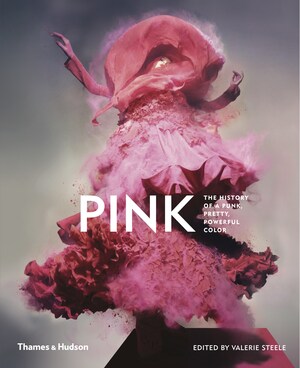 This beautifully illustrated volume explores the cultural history, especially in fashion, of the color pink from the 18th century to today.

Today, with the advent of “millennial pink,” the color formerly associated with Barbie has acquired a new identity. Nor is this the first time the symbolism of pink has been radically transformed. In collaboration with a major exhibition at The Museum at the Fashion Institute of Technology, curator and fashion historian Valerie Steele explores the history and significance of pink in fashion, art, and culture from the eighteenth century to the present.

Steele and her co-authors tell the whole story of this controversial color, emphasizing how its meanings changed throughout the centuries and across the globe, in cultures as diverse as France, India, Japan, Mexico, and the United States. In eighteenth-century France, men and women alike wore pink, which was a fashionably “new” color. A century later, however, pink had become feminized and eroticized in the West.

Pink is beautifully illustrated, with images of stunning pink fashions given context by photographs, advertisements, and works of art. It features essays by scholars across the disciplines, giving readers access to a wealth of research into subjects as diverse as Hollywood movies and the symbolism of the pink triangle. This book will appeal to those interested in fashion and culture, as well as those who love pink.

'Pink fashion can be fierce and feminist, punk and powerful,' [Steele] concludes. After reading this fascinating history, we couldn't agree more.

In Pink, Valerie Steele brews a mesmerizing potion of historic and cultural intrigue emitting from the world's most polarizing color. I am always captivated by Dr. Steele's work, but Pink is especially hypnotic. Like me, you won't be able to put it down!

Valerie Steele is director and chief curator of The Museum at the Fashion Institute of Technology and co-author of more than twenty books.