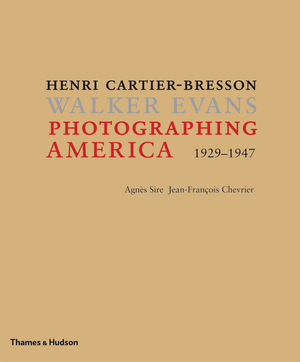 Walker Evans (1903-1975) and Henri Cartier-Bresson (1908-2004) belonged to the same generation and shared an insatiable intellectual curiosity.

This book draws a parallel between the photographs on America made by Evans and Cartier-Bresson in the period from 1928 to 1948. Evans was well-established, had already published Let Us Now Praise Famous Men with James Agee, and was at work on Many Are Called. Cartier-Bresson, on the other hand, was just beginning his new career as a photographer. Although they both approached their work as a form of social criticism, imbued with references to literature and painting, their practices were always quite distinct.

Two of history's greatest shutterbugs documented citizens during some of the country's leanest years- from the Great Depression to the end of WWII- producing haunting portraits of Dust Bowl austerity and postwar uncertainty.

A gem that lets the photography do the talking. Highly recommended.

Vintage black and white images pack a powerful survey of the perspectives and approaches of both in a collection highly recommended for any college-level art library strong in American image history and analysis.

By looking at images made in the United States by both photographers from 1928-1948, with Evans at the height of his career and Cartier-Bresson just beginning his, one gets a unique perspective on the differing sensibilities of these two 20th Century giants.

This intriguing new book offers a fascinating opportunity to compare and contrast the work of the two photographic masters between 1929 and 1947.

This will appeal not only to all photographers, from amateurs to artists, but also to anyone interested in the history of photography and American social and cultural history. Highly recommended.