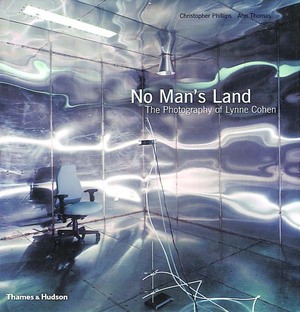 "No Man's Land" is a surreal and terrifying place. It is a world empty of the living, consisting entirely of strange, often sinister interiors: spas that look like forensic laboratories; classrooms that fill us with vague, unsettling fears; offices; military installations; mortuaries....

We know that human beings people these places, but they have scurried away, leaving behind nothing but desks, machines, instruments, walls, ceilings, floors, lighting—the impersonal, neutral artifacts of modern existence. An air of claustrophobia hangs over everything: there is no way in and no way out of these stifling spaces, either physically or ideologically. We need a good deal of persuading that these extraordinary environments actually exist in the real world. But they do. And for thirty years the photographer Lynne Cohen has been searching them out and recording them.

No Man’s Land brings together for the first time more than 100 of the most powerful of these images in both duotone and color from the 1970s up to the present day. Cohen began as a sculptor, but in 1971 turned to photography. Her work has certain affinities with Marcel Duchamp’s ready-mades in that she collects fragments of the real world photographically and turns them into found installations. Her photography should be appreciated alongside the work of her peers in the area of contemporary art and photography, such as Dieter Appelt, Andreas Gursky, Thomas Ruff, Cindy Sherman, Thomas Struth, and Jeff Wall. Cohen’s photography has always been concerned with psychological, sociological, intellectual, and political artifice and her later images reveal a preoccupation with deception, manipulation, and control.

No Man’s Land includes a critique of Cohen’s work by Ann Thomas, Curator of the Photographs Collection at the National Gallery of Canada; an interview with the photographer; and a preface by Pierre Theberge and by William A. Ewing, author of The Body and many other internationally renowned photography books.

Ann Thomas is Curator of the Photographs Collection at the National Gallery of Canada, Ottawa. Among her books are No Man’s Land: The Photography of Lynne Cohen; Beauty of Another Order, which won the Kraszna-Krausz Photography Book Award in 1998; and Lisette Model.

William A. Ewing has been an author, lecturer, curator of photography, and museum director for more than forty years. His many publications on photography include The Body (1994), Landmark (2014) and Edward Burtynsky: Essential Elements (2016).