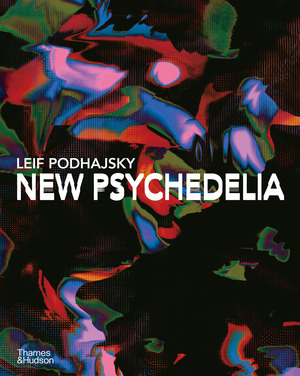 The definitive monograph on the work of celebrated mind-altering artist and album cover designer, Leif Podhajsky.

Over the past decade, Leif Podhajsky’s kaleidoscopic artwork has helped popularize the resurgence of psychedelia by reinventing the style for contemporary culture. By exploring the relationship between the organic and digital realms, Podhajsky’s work speaks to a new generation of curious minds.

Fascinatingly, synaesthesia, which manifests itself for Podhajsky as the appearance of colors with sounds, plays a significant role in his creative process. Music becomes a pebble dropped into a pool of color inside his mind, causing ripples to spread and shades to surface. The results are his hypnotic one-of-a-kind graphics, presented in this volume for the first time.

Leif Podhajsky is an Australian graphic designer, artist, and art director, best known for the distinctive album covers he has designed for some of the past decade’s biggest electronic, indie, and psychedelic artists. His striking style has also attracted leading brands, such as Nike and Ralph Lauren, and the likes of Sydney Opera House, where he has exhibited his ethereal video installations and designs as part of the Vivid LIVE festival. Podhajsky grew up surrounded by the waterfalls and rainforests of Byron Bay and has since lived in Melbourne, London, and, presently, Berlin.