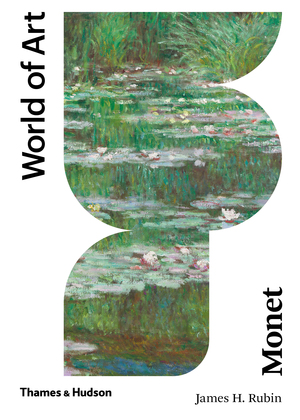 From a world authority on impressionism and nineteenth-century French art comes this new addition to the World of Art series on the art and life of Claude Monet.

One of the most famous and admired painters of all time, Claude Monet (1840– 1926) was the architect of impressionism—a revolution that gave birth to modern art. His technique of painting outside at the seashore or in city streets was as radically new as his subject matter: the landscapes and middle-class pastimes of a newly industrialized Paris. Working with unprecedented immediacy and authenticity, Monet claimed that his work was both natural and true, and therefore, entirely novel.

In Monet, James H. Rubin, one of the world’s foremost specialists in nineteenth-century French art, traces Monet’s development, from his early work as a caricaturist to the late paintings of water lilies and his garden at Giverny. Rubin explores the cultural currents that helped shape Monet’s work, including the utopian thought that gave rise to his politics, his interest in Japanese prints and gardening, and his relationship with earlier French landscape painters and contemporaries such as E´douard Manet and Pierre-Auguste Renoir.

Featuring more than 150 color illustrations of his key works, Rubin establishes Monet as the inspiration for generations of avant-garde artists and a true patriarch of modern art.

James H. Rubin is a professor in the department of art at Stony Brook University, New York, where he teaches art history, theory, and criticism, specializing in nineteenth- century France.