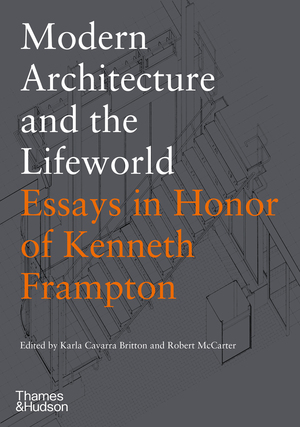 The evolution of modern architecture has been inextricably entangled in issues of politics, nationalism, and the environment, creating a tension between local context and global development that is unresolved to this day. In this context, few writers have exerted as much influence on architectural theory and practice as Kenneth Frampton. In this illustrated volume, twenty-nine contributors from around the world amplify and pay tribute to his writing and thought. Intended for all those concerned with the built environment, this book offers further evidence of how this scholar, humanist, and teacher has shaped our understanding of the working reality of the architect. The premise of Modern Architecture and the Lifeworld is rooted in Frampton’s understanding of how architecture must engage with both cultural and constructional imperatives; and it addresses strategies for grappling with contemporary concerns such as regional identity amidst urban globalization, and tectonic culture and landform in the construction of place.

Supported by the Graham Foundation for Advanced Studies in the Fine Arts.

Karla Cavarra Britton is Professor of Art History at Dine College on the Navajo Nation, and has written extensively about modern and contemporary sacred architecture.

Robert McCarter is an architect, author of twenty-two books, and the Ruth and Norman Moore Professor of Architecture at Washington University, St. Louis.