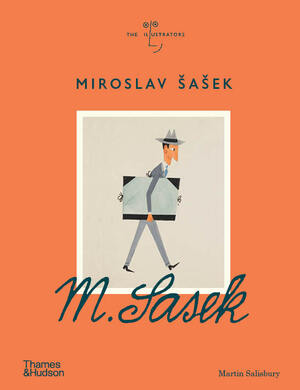 An introduction to Miroslav Šašek, the world-famous creator of the This Is series of children’s books, which provided a generation of kids with stylish and humorous illustrated books on the world’s great cities.

Czech artist Miroslav \xc3\x85\xc2\xa0ašek (1916-1980) is celebrated for his pioneering approach to narrative nonfiction picture books, particularly his bestselling This Is series, which began with This is Paris in 1959 and eventually totaled eighteen books. With their distinct visual vocabulary, this witty collection of travel guides illustrating life and culture in a variety of cities and countries around the world from a child’s perspective, became immensely popular and garnered many awards. The artist’s charming travelogues continue to appeal to adults and children alike, even in a digital age exploding with travel imagery.

Acclaimed author Martin Salisbury analyzes \xc3\x85\xc2\xa0ašek’s techniques and how his work not only reflects his architectural training and the ideas of the midcentury European avant-garde, but also the influence of contemporaries such as Saul Steinberg. In this beautifully designed volume, illustrated with sketches and original artwork from the \xc3\x85\xc2\xa0ašek Foundation in Prague, with examples ranging from Greece to Hong Kong, Rome to San Francisco, Ireland to Israel, Paris to New York, and more, \xc3\x85\xc2\xa0ašek’s best-known works come alive alongside lesser-known aspects of his practice, such as oil painting. Full of insight into the life and work of a singular talent, Miroslav \xc3\x85\xc2\xa0ašek will appeal to illustrators and those interested in the midcentury modern period.