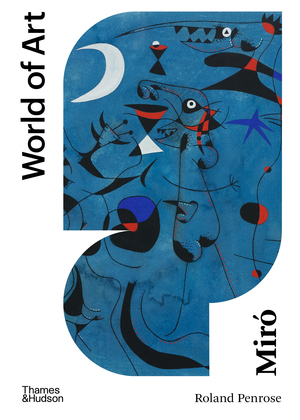 A new edition of this classic illustrated survey on the life and work of Spanish surrealist Joan Miró by historian and close friend Roland Penrose.

Among the great twentieth-century masters, the surrealist painter Joan Miró stands out for the atmosphere of wit and spontaneity that pervades his work. Author and artist Roland Penrose, a friend of Miró‘s for almost five decades, discusses Miró‘s art through its many phases. Penrose also examines its major features—the birth of his signs and symbols; his series of anguished peintures sauvages in the 1930s; his lyrical, poetic gouaches; his monumental sculptures and ceramics; his unprecedented use of poetic titles; and his attachment to nature and the night. A brief epilogue by Eduardo de Benito, London correspondent of the Spanish art periodical Lápiz, illustrates the developments of Miró‘s last years. This new revised edition, now illustrated in color throughout, includes a foreword by Antony Penrose, Roland’s son, outlining the relationship between his father and the artist, as well as updates to the bibliography.

Sir Roland Penrose was born in 1900 and educated in Reading and at Cambridge University. From 1922 until 1936, he lived in France, painting and becoming friends with surrealist painters and poets. After returning to London, he organized the International Surrealist Exhibition in 1936 and, until 1939, painted and exhibited in London and Paris with the Surrealist Group. After the Second World War, during which he served as a War Office lecturer in camouflage, he became one of the founders of the Institute of Contemporary Arts in London, of which he was president for many years. He also served on the British Council and the Arts Council and as a Trustee of the Tate Gallery. He died in 1984, a few months after his friend Joan Miró. Penrose’s publications include Picasso: His Life and Work, Man Ray, Tapies, and Scrap Book, 1900-1981.

Antony Penrose is a photographer and author. The son of Sir Roland Penrose and Lee Miller, he is director of the Lee Miller Archive and Penrose Collection at his parents’ former home, Farley Farm House. He has published a number of books, including a collection of his mother’s photography, Lee Miller’s War, and some children’s books.