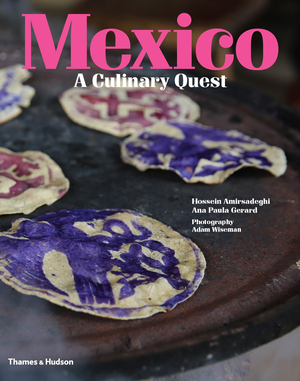 A journey through Mexico’s culinary scene, from historical origins to the modern-day food landscape

Chronicling a journey across some of the country’s most picturesque states in more than 100 entertaining, informative profiles, Mexico: A Culinary Quest captures the essence and spirit of Mexican food history as well as a wide range of contemporary cooking styles. The lively texts are accompanied by more than 1000 specially commissioned photographs celebrating not only the cuisine but also the rich culture of which it is part. While food is at its heart, the lure of Mexico: A Culinary Quest is not just the featured personalities but their tables, menus, local specialties, kitchens, and the country’s magnificent settings and landscape.

From Yucatán to Baja California, Michoacán to Tabasco, Nueva León to Chiapas, Mexico: A Culinary Quest traces long-standing cultural traditions through food, placing history at the center of the Mexican people’s culinary journey across time. The profiles therefore represent a cross-section of both walks of life and social classes: nuns; grandes dames; campesinos; barrio residents; creatives in the arts, architecture, music, film, and media; businesspeople—and, of course, great chefs. From famous watering holes to local holes in the wall, Mexico: A Culinary Quest is a voyage in search of the soul of Mexico through the medium of food.

Ana Paula Gerard has a Masters Degree in Public Administration from the Kennedy School of Government, Harvard University, and is the co-founder of Ayúdate, a Mexican non-profit microcredit organization. She has served her country in various economic positions, including as Chief of the Department of Economic Analysis at the Budget and Planning Ministry.