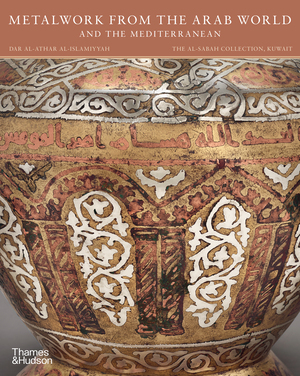 This volume, the latest in the series on the treasures of The al-Sabah Collection, Kuwait, presents metalwork made in Syria, Egypt, Iraq, and Yemen from the early Islamic period through the end of the Ottoman era in the nineteenth century. The pieces include exquisite platters, serving vessels, candlesticks, and pen boxes produced for royal courts, but also many beautifully decorated bronze domestic items, such as bowls, lunch boxes, door knockers, buckets, and lamps.

Rooted in earlier artistic traditions from the Mediterranean, Iraq, Iran, and the Indian subcontinent, the metalwork traditions in this book reflect the complex history of the Arab world following the advent of Islam. The collection starts in the Late Antique period, which informed the early Islamic royal styles of the Umayyad, Abbasid, and Fatimid dynasties, and goes on to trace the emergence of Mosul as a center for metalwork in the twelfth and thirteenth centuries; the influential courtly Mamluk style during the Bahri period (1250-1380s); the Circassian era (1380s-1517); the growth of the European export market in the fifteenth century; distinctive vernacular styles in Yemen during the fourteenth, fifteenth, and sixteenth centuries; and the many revivals and fusions of international styles over six centuries of Ottoman rule (1517-1900s). Finally, an enigmatic group of zoomorphic fittings that defy easy dating is celebrated for the craftsmanship and charm of its animal figures.

This beautifully illustrated volume features many important unpublished pieces and is essential reading for specialists, but it will fascinate and inform anyone with an interest in Islamic culture and history, metalwork, and the decorative arts of the Arab world.

Doris Behrens-Abouseif is Professor Emerita at SOAS, University of London, and previously Nasser D. Khalili Chair of Islamic Art and Archaeology at SOAS.