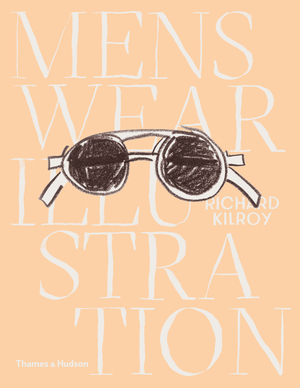 The global interest in menswear has exploded in recent years as the discerning man, whatever his style, looks to express himself through fashion. As a result the industry has seen the rise of a new breed of menswear illustrators who are redefining the industry and its visuals through works commissioned for the pages of GQ, Dazed & Confused, and Vogue Hommes, as well as for the campaigns of Carhartt, Thom Browne, Alexander McQueen, Prada, and Christian Dior, among others.

This inspiring survey of contemporary men’s fashion drawing introduces a generation of illustrators who approach fashion image-making with sophisticated artistry. From the exuberant street sketches of Richard Haines, made rapidly on the streets of New York, to the delicate drawings of Cédric Rivrain or the bold graphic approach of Donald Urquhart, these groundbreaking talents are expanding our perceptions of the modern man.

Richard Kilroy, a top menswear illustrator in his own right, introduces and contextualizes the movement before bringing together designers’ sketches, street-style reportage, editorial coverage, and commissions for leading brands. Whether drawn in pencil, splashed across a sketchbook, or digitally rendered, the illustrations are as varied in style as menswear itself.

Features a portfolio of 290 drawings by various talents…The works of each vary greatly in aesthetic.

The drawings range from beautifully photorealistic (Kilroy's own style) to considerably more eccentric offerings, such as the attenuated drawings of creative director, designer and stylist Aitor Throup.

Richard Kilroy is a fashion illustrator, writer, and editor whose clients include Christian Dior, Canali, John Smedley, and various magazines, including Numéro and VMAN. He is a guest tutor at the Royal College of Art, London, and design tutor at Central Saint Martins, London. He publishes Decoy Magazine, which is devoted to fashion illustration.