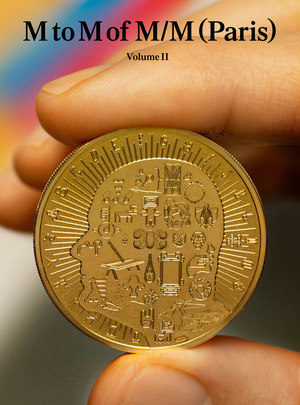 An in-depth monograph of M/M, one of Europe’s most inventive and distinguished graphic-design studios.

Originally established in 1992 by Micha\xc3\x83\xc2\xabl Amzalag and Mathias Augustyniak as a graphic design studio, M/M (Paris) have since defied categorization, becoming one of the most radical creative practices of today through their influential work across the contemporary cultural sphere.

In this illustrated A to Z, beginning and ending with the letter M, interviews with Micha\xc3\x83\xc2\xabl Amzalag and Mathias Augustyniak frame over 850 images of their projects. A series of conversations with rarely-heard luminaries - designers Peter Saville, Experimental Jetset, Cornel Windlin and Katsumi Asaba; fashion designers Miuccia Prada and Jonathan Anderson; artist Francesco Vezzoli; cinematographer Darius Khondji; chef Jean-François Piege; theatre director Arthur Nauzyciel, and curator Hans Ulrich Obrist - are interspersed, providing a thought-provoking insight into the minds of one of the world’s most distinctive creative duos.

M/M (Paris), a creative partnership comprised of Mathias Augustyniak and Michael Amzalag, was founded in Paris in 1992.