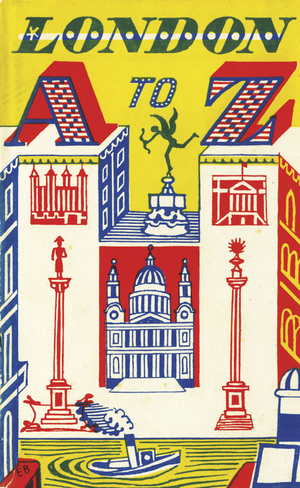 From Art galleries, Bowler hats, and Cockneys to Weather, Umbrellas, and Zebra crossings, an alphabetical, pocket-sized tour through 1950s London

First published in 1953, the year that saw thousands descend on London to watch the coronation of Queen Elizabeth II, London A to Z is a lexicon of the city’s curiosities, from the Achilles statue in Hyde Park “erected by the women of England to honor (if not to resemble) the Duke of Wellington,” via greyhound racing, lost property offices, and umbrellas, to zebra crossings (relative newcomers to London in 1953). Adorned throughout with Edward Bawden’s beautiful and distinctive illustrations, this charmingly idiosyncratic guide brings to life with a dry humor the London and Londoners of the day.

More than sixty years have passed since the volume was first published and while many sights are now lost to time, readers may be surprised to find how this vintage guide continues to capture London’s quirks. A new introduction places the original publication in context, drawing the reader into 1950s London via a brief tour of the book’s most curious, nostalgic, and whimsical entries.

More than 60 years after the coronation of Queen Elizabeth II brought droves of visitors to London, this whimsical guide to the city and its inhabitants is rereleased to celebrate the queen's 90th year. Writer Peyton Skipworth [contributes a] new introduction [and] discusses what and who is still standing.

Edward Bawden (1903-1989) was an illustrator and printmaker. He illustrated scores of books and exhibited regularly at the Royal Academy, the Leicester Galleries, and at The Fine Are Society.

Peyton Skipwith is the author of a dozen books. He is also a regular contributor to Country Life, Apollo, and the Literary Review.