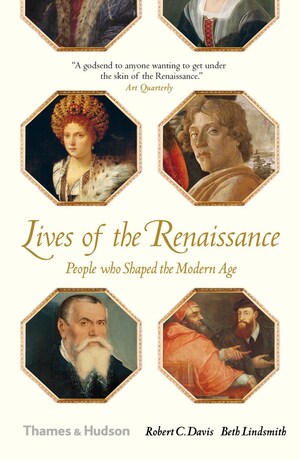 A fascinating history of the Renaissance told through the lives of people from all levels of society.

Like every era, the Renaissance brims with stories. Fascinating, scandalous, and at times seemingly unbelievable stories from the notable lives of wily politicians, eccentric scientists, fiery rebels, and stolid reactionaries, as well as an acrobat, an actress, a poetic prostitute, a star comedian, and at least one very fretful mother are revealed. Some names are famous—Da Vinci, Luther, Medici, and Machiavelli—others are less well known, though no less remarkable.

New in paperback, Lives of the Renaissance is an engaging, witty, and wonderfully illustrated compendium of one hundred notable men and women throughout Italy, Germany, France, Iberia, Scandinavia, Russia, and eastern Europe, who shaped and experienced one of the most creative and inventive periods in human civilization. Lives of the Renaissance reminds us that history is more than dates and abstract concepts: it is also the compilation of countless individual lives and stories.

Robert C. Davis is emeritus professor of Mediterranean history from Ohio State University. He is the author or coeditor of eight books on Mediterranean Renaissance history.

Beth Lindsmith is a writer who has lectured on composition and creative writing at Ohio State University. She has edited numerous academic titles on history, philosophy, and anthropology, and her essays have been widely published.