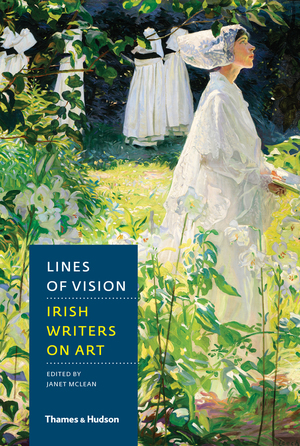 Marking the 150th anniversary of the National Gallery of Ireland, celebrated Irish writers find inspiration in its magnificent collection

In 1864 the National Gallery of Ireland opened to the public in Dublin. It then housed just 112 paintings. Today the gallery holds over 15,000 works of European art and is notable both for its extensive collection of Irish art and its Italian baroque and Dutch masters paintings.

For this anthology, published to mark the 150th anniversary of the National Gallery of Ireland, fifty-six Irish writers have contributed short stories, essays, and poems inspired by pictures in the collection. These literary responses to art are by turns profound, playful, and insightful. Authors include acclaimed figures in contemporary Irish literature, such as Colm Tóibín, John Banville, John Boyne, Roddy Doyle, Colum McCann, Paula Meehan, Paul Muldoon, John Montague, and Seamus Heaney. The pictures that the writers have selected are intriguingly diverse. They range from old master paintings by Caravaggio, Rembrandt, El Greco, and Velázquez to works by Impressionist and Post-Impressionist artists such as Claude Monet and Pierre Bonnard, as well as works by Irish artists such as Jack B. Yeats, John Lavery, Gerard Dillon, and Paul Henry.

The book is organized alphabetically by writer and each text is illustrated with the chosen work in color. Edited with preface by Janet McLean, Curator of European Art 1850–1950 at the NGI.

Beautiful…Some writers, such as Banville, respond directly and insightfully to a painting; others, such as Evelyn Conlon, imagine themselves into the subject's consciousness…Seamus Heaneys last poem, 'Banks of Canal,' written 10 days before his death, is but one of many treasures in the volume.

This attractive book offers stimulating insights into how art is perceived and how it inspires…Recommended.

A powerful examination, highly recommended for any collection strong in Irish culture …

An incredibly beautiful and rich book.

Janet McLean is the curator of European Art 1850-1950 at the National Gallery of Ireland.