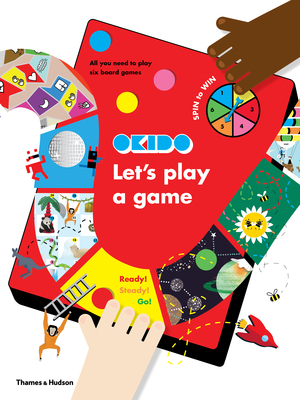 OKIDO’s Let’s play a game packs six re-imagined, classic board games into one box, which opens to reveal six pop-out colored counters and an integrated, numbered spinner that functions as a die. Inside a wallet are three folding double-sided game boards. The simple rules for each game are printed on the inside of the lid, and the entire game is printed on durable card and is suitable for two to six players. The games include: Space Race (steer your rocket through outer-space obstacles back to Earth); Noisy Game (make body noises as you match them with their body parts); Slither and Climb (go up and down as you meet all the animals); Ready, Steady, Disco! (follow the actions to make dance sequences); and Superbuzz! (how long will you fly between the flowers before you get eaten by a bear or caught in a spiderweb?). The boisterous games also help children (age 4+) at pre-school, school, and at home with mathematics, coordination, and matching and sorting skills.

OKIDO is an innovative group of London-based designers, illustrators, and authors who create an art-and-science magazine of the same name for young children. In spring 2015, their television show will air on the BBC. Author Sophie Dauvois is a scientist and teacher. Rachel Ortas is an illustrator and artist-in-residence at Central Saint Martins, London. Alex Barrow is the magazine’s art director.