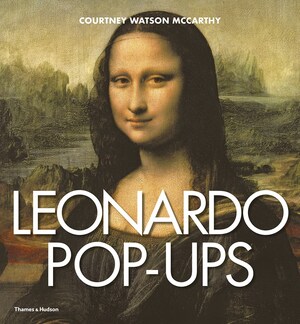 A beautiful and dynamic new way of looking at the work of Leonardo da Vinci, one of the greatest painters, inventors, and scientists of all time.

Experience the most famous Renaissance artist and inventor in a brand-new way. Courtney Watson McCarthy has crafted many brilliant pop-up books, featuring artists like Antoni Gaudi´ and Salvador Dali´, and Leonardo Pop-Ups is the most dynamic yet. McCarthy showcases a variety of pop-ups showing off Da Vinci’s many talents; beyond his famous Renaissance paintings, Da Vinci has also been called the father of paleontology and architecture, and has been credited with the inventions of such diverse machines as the helicopter, the parachute, and the tank.

Featuring many of Da Vinci’s most enduring artworks, both as illustrations and pop-ups, including The Vitruvian Man, The Last Supper, and, of course, the Mona Lisa, Leonardo Pop-Ups also includes Da Vinci’s self-portrait, an overview of his architectural designs, and inventions such as a flapping ornithopter. A beautiful new way of looking into one of the greatest minds of all time, Leonardo Pop-Ups is fun for experienced art historians and budding artists alike.